Several years ago, we embarked on a project to address the current crisis regarding Sunday Mass attendance.  Our goal was to place the emphasis on why attending Mass makes sense and why it is critical for each one of us.

A pamphlet was put together titled Perfect Sense which attempts to bring that kind of an explanation about the Mass to those that are struggling to understand why the Mass is essential for them.  The appeal targets all people of good will to take a fresh look at our human condition and our good sense of justice in order to demonstrate that God's plan for us involves our participation.

In December of 2018, on the Feast of Our Lady of Guadalupe, Bishop David M. O'Connell, Bishop of Trenton, granted the pamphlet his imprimatur.

Over the last 7 years, thousands of hard copies have been shipped to locations all over the United States, as well as to locations in South Africa and Australia.

Since the release of the pamphlet, three radio interviews were conducted with EWTN affiliate stations in New Jersey and Chicago.  Subsequently, a correspondent with EWTN's National Catholic Register reached out and conducted a 45 minute interview.  The pamphlet will be included in an upcoming article highlighting the steep decline in Sunday Mass attendance across the United States.

We hope this explanation will bring much joy and conversion. 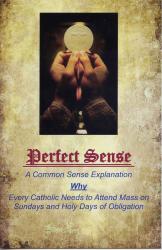